In Defense of the Good Old-Fashioned Map

Sometimes, a piece of folded paper takes you to places the GPS can’t

It was less than four hours until our dinner reservation at Napa’s French Laundry — all 14 butter-and-duck-fat-sopped courses — and I needed some exercise. Both to build up a suitable appetite and as a prophylactic against the 25,000 calories I’d be cramming down my gullet come dark.

My hotel was in Yountville and I’d done no pre-planning. I asked the concierge for a running or hiking trail nearby, with underwhelming results. So in typical California fashion, I decided to drive to my exercise. A quick Google search turned up Jack London State Park. If it was named after the author of White Fang and Call of the Wild, it had to kick ass, right?

I plugged the address into my car’s navigation and got the most boring route ever conceived — a long, C-shaped snooze that included Napa’s overstuffed State Route 29, full of would-be oenophiles re-enacting Sideways. A 30-mile drive that would take 45 minutes. I just didn’t have time for it.

So out came the map. A real-deal, crinkled, poorly folded hunk of paper that gets shoved into the bottom of my luggage any time I head to Northern California. I spread it out on the dashboard and pinpointed my co-ordinates. It turned out that Jack’s joint (where he built a ranch and was buried) was only 17 miles as the crow flies, directly over the top of a mountain. And there was a road, called Trinity, which jigsawed savagely over the ridge. The GPS in my borrowed BMW turned up its nose, refusing even to list Trinity as an option. It turns out that 18-wheelers and buses get stuck up there all the time, unable to negotiate the tight turns. But as well as saving me time, it looked like a hell of a fun ride (especially considering the way I drive).

These maps are the histories of my various trips, adventures undertaken and survived; grand ideas borne out (or not); harebrained routes eventually abandoned.

Chalk one up for the analog experience. I love maps. I buy them just before I leave on any significant trip and they end up cluttering my apartment, living under the bed in plastic bins and shoved in the corners of bookcases. Once in a while I try to organize them, and instead get lost in the various topographies, hieroglyphic legends and squiggling lines. These are the histories of my various trips, adventures undertaken and survived; grand ideas borne out (or not); harebrained routes eventually abandoned.

There is no more order to my maps than to those of my actual journeys. The Atlas mountains of Morocco are shoved against the Colorado back country. The island of Tobago (where I once drove every single road) is nestled alongside South Africa. These documents serve as a better record of my travels than a journal — not least because I’m too lazy to write a journal. 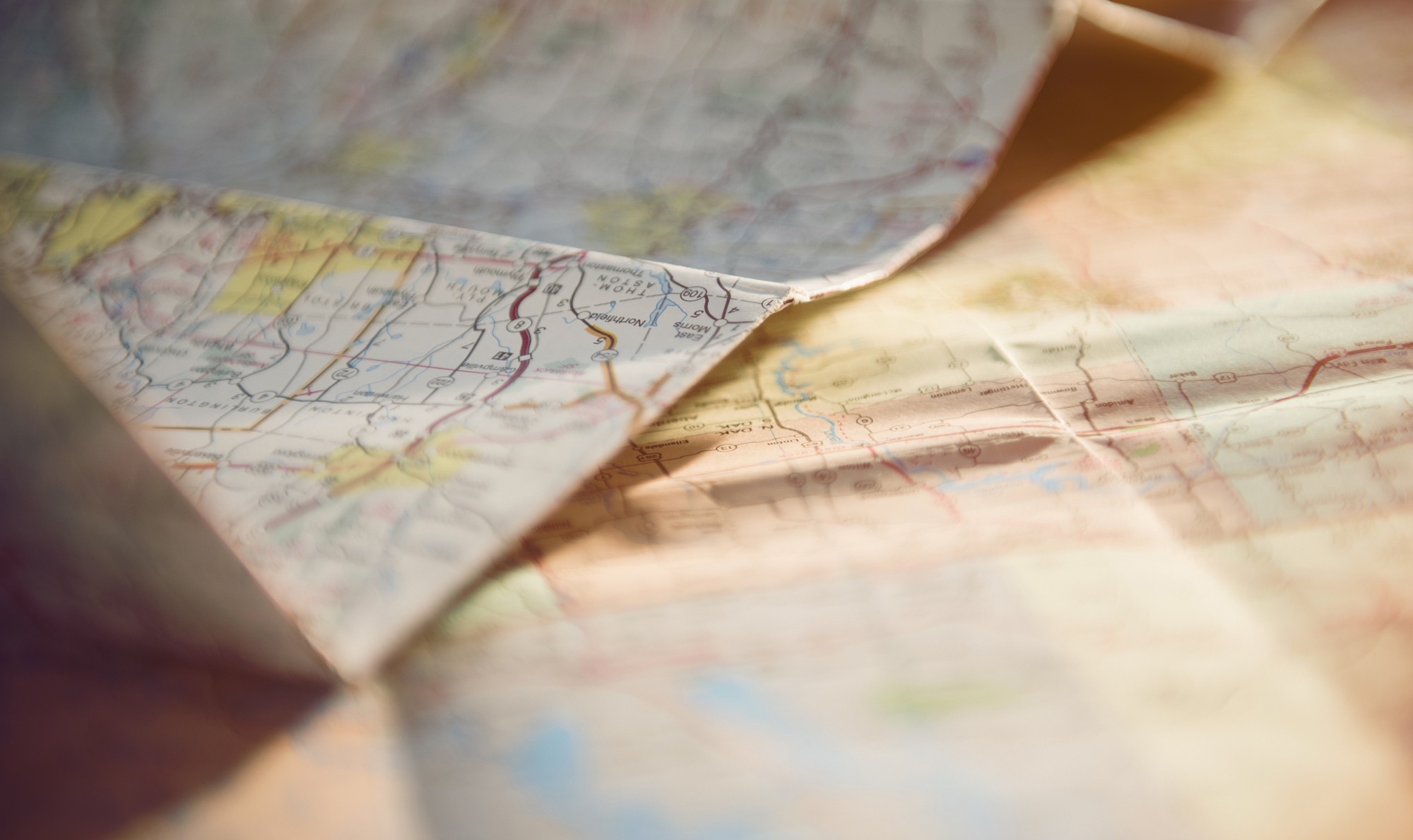 It’s easier to orient yourself on a big spread of paper, and your eye is drawn to roads and routes and green spaces you’d never notice on a small screen

Make no mistake: Maps are a pain in the ass. You need a graduate class in origami to fold them. And, yes, nine times out of 10, your smart phone gets the job done much faster.

But just like reading an actual, bound book or magazine versus an iPad or Kindle, you consume a real map differently. It’s easier to orient yourself on a big spread of paper, and your eye is drawn to roads and routes and green spaces you’d never notice on a small screen. A map invites time and care and observance of the details. It encourages the kind of exploration that happens in real life, when you’re out on the road, instead of the turn-by-turn rigidity of a digital device.

And when I’m listening to directions from car or phone, I’m loath to take that curious byroad or phantom trail, worried that it might befuddle the logic of the machine, and that I’ll never quite find my way. (Some GPS units seem to insist that you return to the place where you started taking creative turns, rather than simply re-mapping the route.) So, I resist my more adventurous urge and follow directions.

That’s a bummer, because my best stories usually begin with me getting lost. With a map in my pocket, I always feel (somewhat) confident of finding my way again. And I never worry about a satellite signal dropping out.

This article was originally written by Jason H. Harper and appeared on Medium on February 12, 2015. You can read the rest of the article on Medium.